There’s no doubt that over the last decade India has transformed itself digitally. The technology startup ecosystem has witnessed a significant growth trajectory. However, the question that arises is, ‘where does that leave Indian tech entrepreneurs, investors, and corporates?’ The ongoing tech revolution has given rise to deep technologies that will be at the heart of the next wave of information disruption. It’s also the next big thing that both corporations and venture investors desire. So, the question to ask now is whether commercial applications – that were earlier led by institutions, corporates, and government – are being replaced by DeepTech startups? Let’s first take a closer look at what DeepTech actually is.

In a nutshell, DeepTech is a portmanteau of Deep Technologies. It is a term for technologies that are based on scientific or engineering breakthroughs and have the potential to be commercialized. They aim at solving the most complex challenges in the world around us. DeepTech refers to startups whose business models are based on high-tech innovation using recent technological advances in multiple areas. At present, 19% of tech start-ups are leveraging DeepTech solutions to build product competencies for their market expansion.

For this reason, deep technology has the power to create its own markets and disrupt existing industries. Innovators and investors who are looking to further this technology view the world typically through one of the following lenses:

A.) Technology (such as quantum computing)

B.) Sector (such as advanced manufacturing or Industry 4.0)

Problem (such as skin cancer cure) 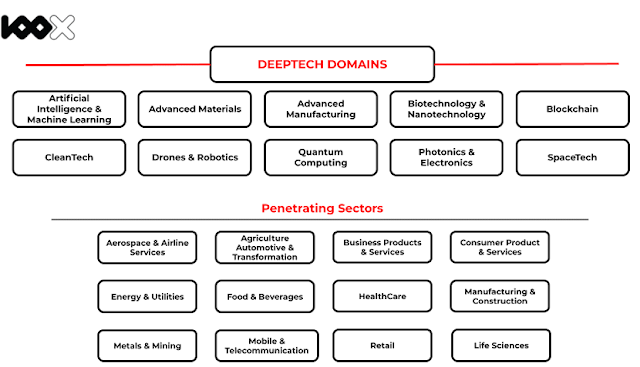 When a DeepTech solution works, it creates a platform technology that can cause disruption across markets, jumpstart new industries, and address existing bottlenecks in traditional sectors. The sectors and technologies included in DeepTech are broad and ever-shifting.