Why We Invested in Road Metrics 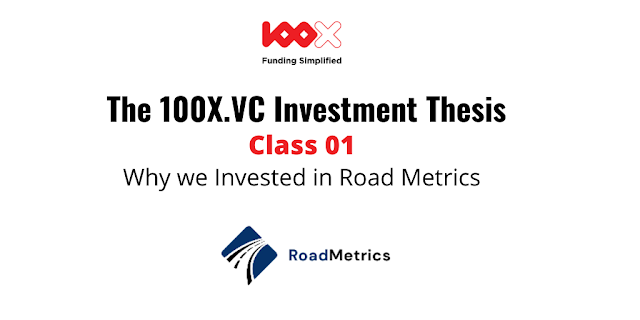 Just earlier this year, for most of us, getting to work largely meant hitting the road, and not the cloud. While some welcome this transition to working from home, no one will deny that they miss the road. The economy certainly does.

The freedom of the open road is seductive, serendipitous and absolutely liberating. The Pandemic has interrupted this freedom like the egregious, nasty and nearly bottomless pothole that not too long ago interrupted the daily Indian commute. If only we could see it coming, you say? Not sure of the pandemic, but the pothole- we definitely can!

The Indian Road Network at 5.9Mn kilometre is the second largest in the world. Highway construction in India increased at 21.44% CAGR between FY16-FY19 and has been a major sector that propels the development of the Indian Economy. In May 2020, the Government of India set a target of constructing roads worth Rs 15 lakh crore over the next two years. With robust demand, higher investments and attractive policy support the development of road infrastructure in India is witnessing great momentum.

With a focus on adhering to international quality standards, some of the major challenges posed include adoption of energy- efficient technologies, auditing, maintenance and enforcement of those standards. The Ministry of Road Transport and Highways in an effort to bench-mark the quality has laid out three broad metrics of assessment- efficiency, safety and user-services. It plans to design interventions and enhancements according to the outcome of this survey which also includes studying the availability of Advanced Traffic Management System (ATMS), functionality of structures, provision for grade separated intersections, cleanliness, plantation, wayside amenities and customer satisfaction.

Such road mapping and quality audit is usually done manually through extensive fleets managed by independent contractors which is highly inefficient, resource intensive and takes years to complete. The dire lack of major infrastructure players with the tech and who can assure the pace, accuracy and cost-effectiveness is a looming threat to the country’s ambitions.

Capturing RoadMetrics on a smartphone

While the government was busy charting new road development and maintenance strategies with a larger economic outlook, two Computer Engineering graduates at Sarvajanik College of Engineering & Technology- Dipen Babariya and Mishal Jariwala, were busily engaged in adopting emerging technologies to solve for this future. The duo was soon joined by Nikhil Prasad Maroli in Bengaluru, an Postgraduate Industrial Engineer from Texas A&M University with experience in working with Electric Vehicles at Tesla and LiDar Technologies at Velodyne LiDar. RoadMetrics was set up as a provider of an accurate, efficient & portable solution to measure road conditions. and improve public safety by aiding accelerated road maintenance.

Series A-funded RoadBotics (based in the UK), Seed-funded Streetscan (based in the US) & Grant-funded Cyface (based in Germany) have validated a similar implementation in their corresponding geographies. RoadMetrics with their patented road monitoring system is well poised to define this space in the larger, Indian market.

RoadMetrics is powered by their proprietary AI algorithms which have a 95% real-time accuracy in detecting road defects. It incorporates a standard smartphone camera, attached to a vehicle, to collect roadway image data. This data is uploaded onto their platform where deep learning-based image processing is applied to identify road and pavement features. Based on the defects identified such as potholes, linear cracks, alligator cracks, asphalt raveling, rutting etc, the roads are classified into 4 different quality levels.

They offer an enterprise dashboard application for road infrastructure firms to detect road conditions- charged on a per kilometre basis- with added capabilities for budget allocation and maintenance prioritization. Furthermore, targeting the 300M Google Maps users in India they offer a first-of-its-kind route navigation app with features of accessibility and road condition alerting.

Armed with their proprietary deep-tech algorithms, a smartphone and tie-ups with local cab aggregators they have successfully mapped out 200km of roads in Surat and over 1000km in Bangalore. This year they are set to follow through most major cities in the country. 100X.VC values companies having a core deep-tech IP and RoadMetrics currently stands unchallenged. The immense portability, speed, rich analytics along with the first movers advantage has positioned them well to capture the major market share.

The superior city road intelligence continuously acquired by their AI models will prove to be an ace up their sleeve when autonomous vehicles arrive on Indian roads. With the upcoming deployment of LiDar Sensors they will have a more precise understanding (upto 1cm) of the depth and distance of objects in view. With this, their product is well set to aid the autonomous vehicles which are bound to struggle on Indian roads notorious for the unmarked lanes, narrow neighborhood roads, unforeseen roadblocks and non-uniform pavement dimensions.

RoadMetrics will ultimately accelerate the autonomous vehicle adoption on Indian roads. In the meantime, they promise us an India with better roads, something that we will all deeply cherish in the post-covid world.