On the 17th of September 2021, the world witnessed the birth of a dark social satire which found place on the screens of 132 million Netflix users in over 90 countries in the days to follow. Said to have broken records for previous in-house Netflix blockbusters and even across other streaming platforms, the South-Korean original, Squid Games was successful in clocking in a handsome amount for the platform. However, the global lauding of such a unique spectacle meant much more than just 8-9 hours worth of entertainment. In a country like India, where few years ago it was difficult for English content to find a spot in mainstream entertainment let alone a Korean or a Spanish (La Casa De Papel) to mark their presence, there has been a tremendous change in video content consumption habits, ignoring the shift would not be anything but unwise.

Over the last decade the prominence of video content, the long and more recently the short format, has increased drastically. For the larger part of the past, the rising internet penetration, cheaper tariff and the increasing acceptance of varied creativity have led to the growth that we see in today’s video content ecosystem. However, for the last couple of years, especially during the course of the pandemic, an unavoidable mention across discussions, families and individuals experienced a prolonged stay in a period which demanded them to work and worry at the same time. In such times, digital entertainment was something that stuck around to lift up the mood. According to a report by Bain & Co, a surge in both users and usage was bolstered during the stay-at-home periods. Evidently, India’s large base of approximately 640 million Internet users, of which about 550 million are smartphone users, is rapidly growing and spending more time online. An average internet user in India spends more time online than several countries, a list inclusive of China. With around 4.8 hours spent on the smartphone, an astonishing one hour is spent consuming video based content. India’s online video user base consists of over 350 million people, growing at 24% annually from 2018 to 2020,  faster than the likes of China and Indonesia. Even with such promising figures, India can still expect enough space to grow further as at present, owing to our massive population, only a little over half of the population uses the internet. 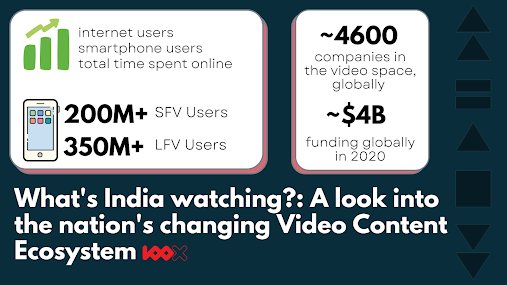 Today, taking advantage of the above landscape and recognising the need of the audience to look for something to lift up their spirits, big players as well as an impressive cohort of new players have marked their presence in the video content market. With over 4000 companies in the OTT video spectrum, Netflix, YouTube, Roku, Vimeo, Patreon and Twitch take up the top spots in the global market offering arrays of video content and services. Domestically, Netflix with Amazon’s Prime Video could be termed as top contenders but only to be closely followed by the likes of MXPlayer and TVFPlay. At present the major players on a domestic screen are, not surprisingly, companies under existing media and entertainment houses with a limited share for new companies which are just starting up. However, the promising future of the ecosystem has encouraged many to build something worth making a mark.

Video-based content can broadly be bifurcated into LFV and SFV meaning long-form and short-form video respectively. Looking from a revenue perspective, companies have resorted to different monetisation models that reflect the platform’s core consumer in the income pyramid: subscription video on demand (SVOD), freemium, ads video on demand (AVOD), and transactional video on demand (TVOD).

At present, startups as well as established companies are looking at common trends to win a share in the market. Creators, production houses and streaming platforms are actively exploring for opportunities in new foreign content and experimenting with genres to produce more original content to lure watchers. More so, no longer limited to the boundaries of feature films and multiple season series, content houses have shifted or rather have started to provide new-age video fodder in the form of sports & game streaming, user-generated content, region/language specific videos and much more.

An estimated funding of $3.8 billion has been invested in OTT video streaming platforms in the last two years, with video hosting platforms, SVOD, game streaming services, OTT video management and live streaming gaining popularity within the investor community. In India, the most prominent domestic success story is of MXPlayer in the long format. TVFPlay, founded by The Viral Fever (TVF), is exploring regional content consisting of originals as well as content on Netflix. The company founded in 2015, today has clocked in more than 7 million app downloads. FastFilmz, a platform for South Indian video content was acquired by SHAREit at a valuation of $13 million in 2018. The growth of startups in the area poses an opportunity for mature stage companies to explore inorganic methods to capture talent, technology and customer base. Game streaming, a  new entrant in mainstream video content streaming, has been successful in capturing the attention of new and existing game fanatics and therefore, the huge interest has translated into the current investment positive response to the space. A recent example, Loco raised $9 million in a funding round led by Krafton, which distributes PUBG in India, and gaming media fund Lumikai. More such include niched based platforms focusing on specific segments, for example Stage, a platform focusing only on comedy and stand-up content.

In addition to building independent platforms hosting or streaming content, the increasing customer attention has led to startups focusing on building aiding services like video streaming management, post production services, fan experience building, building review portals, merchandises, communities and much more. The shift in momentum has made it easier for small startups dealing with fresher talent and the lack of support from the mainstream entertainment  industry  to emerge successful. The rise in the number of indie video content making it big is good evidence.

As of today, trends point towards direct-to-digital and subscription models to emerge as substantially successful in the future. Further on, the fact that viewing experiences are beyond numbers has settled in and therefore, the quality of content has been given a front seat. With fresh ideas emerging from the startup ecosystem, the trends we are seeing now will forever change the future of video. Some major developments are expected to shape the future of the video market in India: an out-and-out explosion of content, including original, regional, and niche material; value chain integration, with OTT players dabbling into content production; tech-enabled personalisation and recommendation algorithm sophistication; a push for monetisation; user engagement via social features; and tighter scrutiny and content moderation. The market is clearly not in a “winner takes it all” space, there is a lot to be accomplished and that too at a large scale and more so, investors are privy to this. For startups, with sound teams and a knack for eyeing the opportunities in this accelerating environment, success is not too far.

100X.VC is the first VC to invest in early stage startups using India SAFE Notes. We fund exceptional Indian founders. We deeply value our relationships with founders, co-investors, and corporations.

This article is by 100X.VC Research with contributions made by Misri Kothari, Analyst Trainee at 100X.VC