In the Land of Angels: A look into India's Early-stage Investment Ecosystem

In a broader sense, angel investors are attributed with providing the initial financial support to early stage startups. Situationally, their contribution and roles differ, thus generating commercial or organisational value, sometimes both. Currently, linked with relatively quicker and high rewards, these returns come at an expense of deploying capital at a time which demands an even higher risk appetite, as only a small proportion of these startups are bound to be successful. The number of such early stage investors in India is still far lesser than that in some countries with advanced startup ecosystems, summing up to 6000-7000 or so.

The ecosystem, even before the two years of the pandemic,  had been witnessing a rapid acceleration with regards to the number of startups and the infrastructure available to them. What might have been a devastating period for these companies turned out to be an extremely successful one. In this journey, the pool of angel investors in the nation only grew more, backed by their strong belief in startups as an important asset class due to the rising innovation quotient. Evidently, it reflected in the cash flows, in November of this year alone, as per one of the sources, over 30 growth and late-stage and 92 early-stage startups raised around $4.33 billion. According to a recent report by the Indian Private Equity and Venture Capital Association (IVCA), startup investments by super angels and angel networks rose 24% to hit a new record of 341 companies in 2020 from 275 a year earlier.

Increasing transparency, connectivity and awareness has led to a more formal understanding about the space of startup investment which in turn has aided its evolution into a preferred asset class for many investors. With being the third largest startup ecosystem in the world, India is now welcoming industry professionals, traditional investors and even entrepreneurs themselves as angel and early stage investors, a trend which was not seen earlier. The traditional angel pool, inclusive of family offices and HNIs, is now expanding with individuals from various domains, who are participating to bring more value to the team along with a spot on the cap table, not just restricting to monetary support. A higher level of disposable income and the need to diversify has directed new-age investors to take this route, thus creating a more favourable investment environment for startups as well. They are now contributing with their expertise in relevant areas of expertise, establishing connections and even grooming founders to successfully manage their business, all from their personal and professional experiences. This sort of a collaborative approach to financial deals is a first in India where investments were usually positioned as a purely return-anticipated arrangement. A pan India based angel network hinted that angel investments are bound to gain the centre stage in the investment arena. The belief is that with the rise in innovation and the easing of double standards for Indian entrepreneurs, the investment game has reversed into a chase for opportunities, where investors are constantly on the lookout for revolutionary ideas and thus not shy to express their interest. The current momentum in early-stage investors is appreciated, but to level with other ecosystems like China, the number of investors needs to increase in multiple folds. 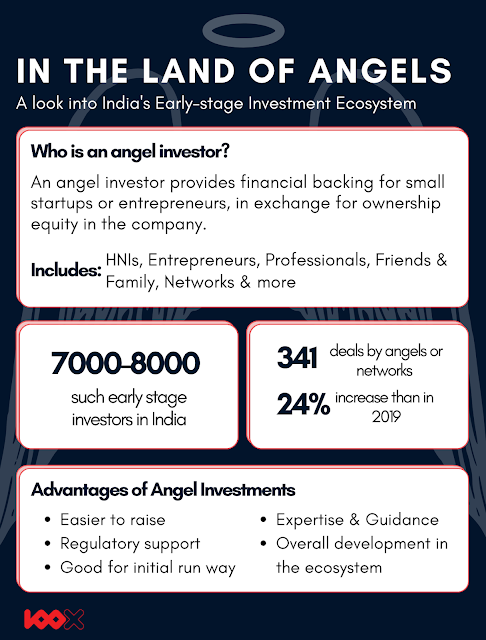 At 100X.VC, there is a constant attempt to create awareness amongst both investors and founders to understand the simplicity and benefits of this angel-founder relationship. As of today, we have invested in 70 companies and then raised 24% of the followup capital with a sequel iSAFE (India Simple Agreement for Future Equity), having 427 HNIs/angel investors as a party to them. Our positioning as a discovery fund and also as “enablers” of a simplified investing process, is imperative at the stage at which the Indian startup ecosystem is at present. The understanding is that there is a need for angels to fill the void for quality deals with their monetary and expertise until they end up raising a significant amount in an institutional round. This will end up increasing the number of good deals that emerge, simultaneously lowering the number of companies going deadpool. This exercise, additionally, is beneficial for making individuals, influenced by peer pressure and who lack bandwidth, more aware about their options and some mandatory do’s and don’ts.

The growing support from regulatory authorities also acts in favour of the development of the investment scene. Fiscal measures like the angel investment tax exemption as well as the 3-year tax holiday for startups were some of the prominent policy decisions that made the space attractive for new investors. In addition to this, contemporary policy decisions like reduction in taxation and surcharges, amending AIF norms to include investments by angel funds for startups and other advancements to improve the ecosystem on the global front as well, have all acted as a booster, both directly and indirectly. The increasing support from the state acts as an assurance for new entrants to this investment space.

The rising startup valuations, the large exits, the endless talk of “disruption” have evidently led to hyping up the ecosystem. The thought of a bubble is inevitable, but in this matter it is a little hard to conclude. When there is a possibility of the bubble bursting, there are optimists on the other end of the spectrum who keep the momentum going. This very attitude of risk takers helps them keep their cool. The ecosystem is bound to receive continued support from all stakeholders for a very long period of time. Primarily because its existence is fuelled by modern youth’s innovativeness and the urge to bring a change. Apart from this, traditional big players are becoming boring, for the lack of better words. New solutions derived from unconventional methods keeps things exciting and thus, keeping the interest alive.

100X.VC is the first VC to invest in early stage startups using India SAFE Notes. We fund exceptional Indian founders. We deeply value our relationships with founders, co-investors, and corporations.
This article is by 100X.VC Research with contributions made by Misri Kothari, Analyst Trainee at 100X.VC